Felly Gomes is a yoga instructor, public speaker, environmentalist, social entrepreneur and the founder of the NGO, LIVE HAPPY. He looks for practical and sustainable community solutions. The ethos is derived from the importance of living a clean, happy and healthy lifestyle. Bhoomiputra (Son of the Soil), hailing from the village of Assagao, he has been working to preserve, protect and restore his sacred mother land through a holistic approach. After enhancing his understanding on yoga across various centers in the country, he is now doing his research at SVYSA Yoga University. Felly has also been travelling around the world spreading yogic knowledge and the sustainable village model. He is always connected to his people and the soil.

Today Joanne’s experience over the past decade, with different acts and across genres, has made her a constantly evolving artist with a diversity and assuredness that is rare. Ten years ago “Jo” had a two year stint with a local pop/rock band. It became her foundation. An insight, that her future as a musician and singer was her destiny. In 2006 she won the Kingfisher Voice of Goa title for her rendition of the greatest love by Whitney Houston. Subsequently, as brand ambassador for Kingfisher voice, she completed 150 events in less than two years and made her mark as a voice to be reckoned with.

International singer songwriter and wellbeing practitioner Natalie Matos has been living in Goa for the last 15 years. Her primary passion has always been to help people get the most from life. Her second album, eXhale, gained the support and endorsement of UK mastering engineer, Pete Maher (Lana Del Rei, U2, Rolling Stones) a feature on Ibiza Global Radio and film placement in Amazon Prime release, ‘Shreelancer’. Also known for developing Conscious Voice, this unique form of healing combines the power of music, meditation, coaching, Reiki and voice. Profoundly transformative, Natalie channels her voice to a frequency that helps the body to transcend the stress and trauma that it holds.

Singing has been her passion since her teenage years. She has sung with some of the best choirs and bands in Mumbai. Now that she lives in Goa, Nelly enjoys singing her genre of music – Retro & Jazz. Through her singing, Nelly hopes to inspire people, even if in a small way and bring joy into their lives – that makes her happy. She sings from the heart & her music has that personal touch that keeps her audience enthralled.. 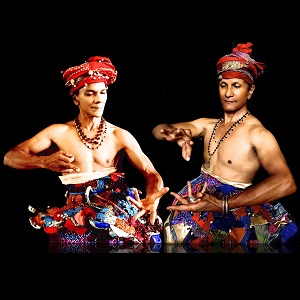 The Netherlands based dance masters & makers, Costume Objet D’art designers and stylists, the brothers Ram Kishna & Suresh Kishna, are exponents of the original Creative Tradition of the classical dance & music, renamed Bharata Natyam in 1930. They studied in Tanjore at the Parampara Gurukula of Prof. Guru Kittappa Pillai and his son Guru Chandrasekaran. The Brothers performed, taught, guided from 1993 novices and dancers in Europe, and India. Furthermore, they inspired the creative industry with successful projects funded by The Netherlands government. Their project “Image Of Precision” received the Amsterdam Arena Award 2004 in a 3-days multi-cultural Art Festival.

AN Expressive Arts Therapist, Corporate Trainer, Satyashree believes in the power of people to become the architects of their own life. She is dedicated to enable individuals to overcome their fears and discover creative solutions to the challenges that are a deterrent to their personal, professional and social wellness. She uses the universal language of creative arts to facilitate engagement, communication and healing. She employs the principles of pyrography, psychodrama, movement therapy, art therapy and letter writing for individual and group therapy. She is a pet mom to two rabbits – Plato and Cleopatra, and loves her coffee!

Vivek is a musical talent with diverse reach. Widely known for his work as a Music Director for films, he has produced music for 23 feature films, several shorts, documentaries and albums. In 2009, Vivek moved to Goa where he has built a well equipped recording studio, collaborating and producing music for various artists from across the globe. A popular drummer and percussionist, Vivek has performed and toured with several renowned musicians, displaying a keen sense for improvisation and fusion of various styles. While he has of late shown a keen interest in experimenting with electronic sounds, he also feels a deep calling to explore music and sounds that “connect us with the Earth”.

Bijon, an engineering and management professional specializes in and provides guidance to industrial and other organizations in the areas of Quality Technologies and Quality Management, Environmental Management, Information Technology. He also delivers public lectures at places like International Centre, MOG, RotaryClub, XCHR on Transactional Analysis, Optical Illusions, Esperanto, Environmental Management, Green Buildings and Green Energy. He enjoys poems from all over the world, by reciting them in their original languages. He writes his own poems in English.